Mauritshuis Murals Tour in The Hag

I hold my breath... What kind of world have I ended up in? I rode my bike unsuspectingly into an alley, straight up to a monstrously large rooster. He runs towards me and tries to warn me: "Watch out Wouter, don't sit still!" I always considered myself a bit of a culture barbarian, but this alley grabs me by the throat.

When our mini-bandit of 4 years old had a themed week “art” at school, he was completely enthusiastic about “Het puttertje” (The goldfinch) by Carel Fabritius. I was dumbfounded. He didn’t have that cultural streak from me. I had to google who this mister Fabritius was and discovered that his work hung in the Mauritshuis. Out of a slight sense of duty to give my children something of culture, I seized this opportunity and we visited the Mauritshuis this spring. 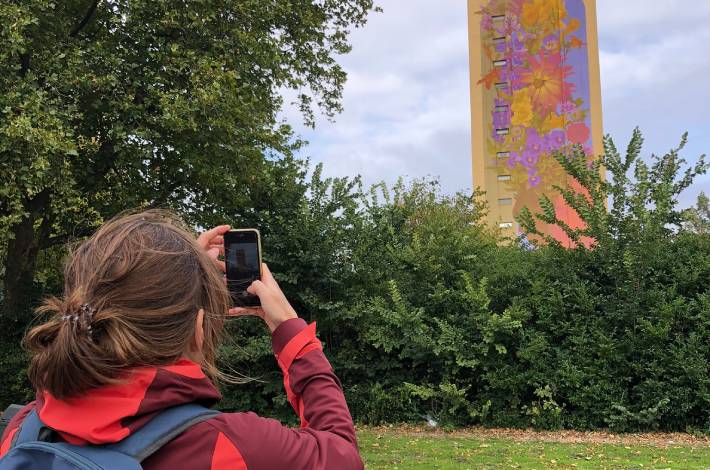 Getting started for the Mauritshuis

In a miraculous way, the Mauritshuis crossed my path again this summer. The Mauritshuis asked four street artists to be inspired by the paintings from the Mauritshuis. They made life-size murals of this. Breakout Bandits were asked to build the Mauritshuis Murals Tour app, which leads you right through The Hague, past all the works.

We have been working hard on the app over the past period. It was finished last Friday and it was time for one last final test. Esther and I took the metro to The Hague Central and there we jumped on our bikes. Armed with a smartphone, the app and a back-up power bank, we drove criss-cross through The Hague looking for 4 “muâhtjes” from The Hague.

Watch a short impression below (Video of < 30 sec).

From the center full of hip shops, we went straight through China Town to the Transvaalkwartier. The app gave a popup at a cross street of the Joubertplantsoen. check. I was satisfied, everything worked. Reassured, I looked up at the mural and was shocked. Of course I knew what the murals would look like, but suddenly I realized how much more detail I could see compared to the screens on which I had seen the murals up to that point. Something started to itch inside. What would the next mural look like?

“Watch out Wouter, don’t get stuck, but break out!”

We cycle through the stately Zuiderpark to a neighborhood that, if you have a positive attitude, can be called a cozy working-class neighborhood. There was little sign of that coziness when we were navigated through the parking lot of the Aldi to a back alley behind the Action. Unsuspecting, I turned my bike into the alley. The app gave a sign. check. Before I could park my bike, however, I was run over by a huge rooster that ran past me. He shouted something to me: “Watch out Wouter”. Just broken free from a surreal world, he tried to warn me in all haste. “Don’t get stuck, but break out!” I put my bike down and took another good look at the alley. I seemed to have entered a completely different world. A world of art that hit me right in the heart. I realized that I am not a culture barbarian at all. I’ve just never seen art that I was really excited about. But this mural grabbed me by the throat.

Recommending this tour feels a bit like that commercial guy from “WC-eend” who recommends its own product. But hey, who cares. I really enjoyed doing it. I’m not someone who visits a lot of museums, but this was really fascinating. It is not only the murals that are impressive, but it is the whole experience of a nice afternoon on the bike crisscrossing through the city. Having nice bite to eat at a nice place where you would otherwise never come. And then that rooster… You have to see that one in real live!